Good afternoon, I hope everyone is having a wonderful day.  I wanted to share with you my thoughts on this movie.  Last week I went to see "Son of God".  I was very excited and happy to support this movie opening weekend, the most important weekend in box office.  I hope holding back my review for a week allowed a few more people to see the movie and allow some of you to comment.

Through My Eyes:
For those who don't know my background I was a theater major.  This consisted of training in both acting and directing, elements of theater, costuming, and set design.  I also minored in Television production.  As a director and set designer I was taught everything on a stage is there for a reason, everything must have a purpose all the way down to the color.  If a woman walks on stage in a red dress it should help tell the story. The dress perhaps tells something about her personality or drawing attention to her in some sort of way.  I am also a follower of Christ.  When watching "Son of God", I wanted to watch it from two perspectives:  1) As a movie goer, to see the story or film as a whole  2) As a witness; if someone asked me who Christ was and what was his message, how would I describe Him?

Movie Day:
I decided to go to the last showing of the night, Sunday evening, on my solo dolo (I apologize for the profanity used by Urban Dictionary).  I resisted the temptation to buy a late night snack and proceeded to theater 12 to the last row, in the back of the house (my favorite seat).  The music starts and narrator is setting up the story for the audience.  The infamous nativity scene is on screen.  Mary and Joseph are in the stable with the baby in arms and the wise men ask Mary, "What is his name?"  Mary says... "Jesus."   "Huh?" I thought to myself.  I could barely hear her, that's weird.  I knew what she said, but it was said so low it was almost a whisper.  Jesus is the name that is above every name.  Knowing the importance of His name, not just as a believer, but historically, as a director I would have asked the actress to say it again.  I know can pick apart movies sometimes, so I overlooked it and resumed watching the rest of the movie.

I loved where the movie began to take me.  Shots of Jesus walking through the mountains were beautiful. Then He met Peter.  Jesus lovingly insisted he go fishing with Peter.  Jesus tells Peter, "We are going to change the world."  It a great set up for an epic film.  Unfortunately, the movie went downhill from there.  The script didn't tell a story.  It was merely a bunch of scenes from The Bible thrown together without any particular theme or point.  The movie started with Jesus' disciple John telling his side of the story, but John was never really seen or featured in most of the film.  The movie mostly followed Peter's relationship with Christ.  John was called "the one who Jesus loved."  If the movie was to be told from John's perspective that would have been a great angle to play with.  The special effects were decent, however, it seemed toward the end of the movie the editors got lazy.  In The Bible, Jesus was taken up into a cloud.  In the movie there was a cut-away shot and He sort of disappeared.  The one that annoyed me the most was during the day of Jesus' crucifixion.  I don't know if the woman who played his mother was a producer on the movie or what, but they kept giving her these close ups and using the same shot over and over again, more than I can count.  Not only that, it was pretty clear she had work done on her face.  I'm not taking a cheap shot at the actress, by any means.  However, this woman should not have been in the movie unless they were making a movie called "Real Jesus of Beverly Hills."  They might as well had used Joan Rivers to play Jesus' mother.  I'm pretty sure people didn't get plastic surgery back then, but it was obvious and took me out of the movie.  I think If you've had obvious work done on your face or any body part you can't do some period pieces.  I Do wish this actress the best and a long and successful career. 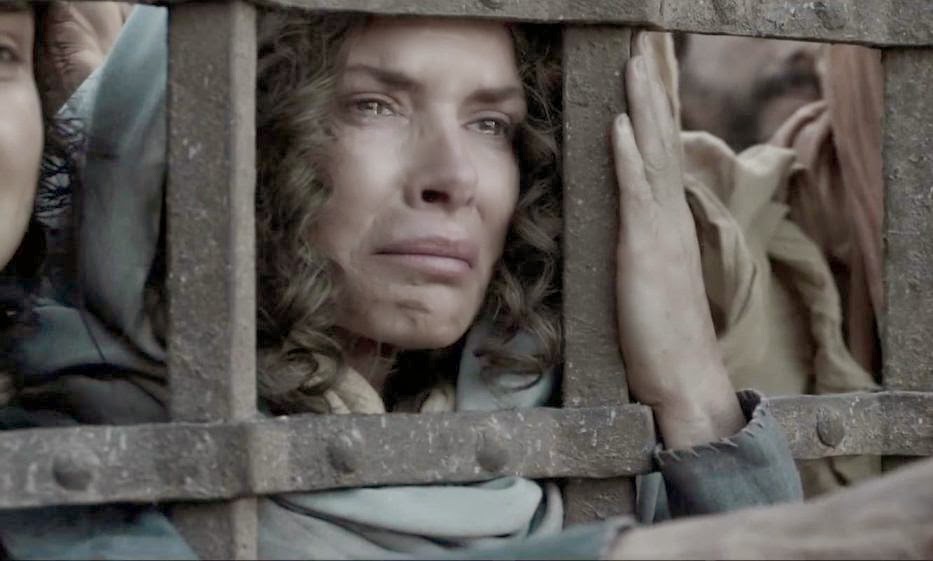 Historically inaccurate; Scriptures and Symbols Misused:
The "Son of God" showed Nicodemus, a Pharisee, coming to Jesus in the day time.  Yes, it did become nightfall once Nicodemus sat with Jesus, but this is inaccurate.  First, Nicodemus was a member of the Jewish council.  He could never go to Jesus in broad daylight without being questioned.  It was highly likely the other members were asleep when Nicodemus left.  Which brings me to my next point. The Bible clearly states Nicodemus came to Jesus by night.  Nicodemus was intrigued by Jesus and is said to have more than likely converted to Christianity.  He was one of the men who helped take Jesus down from the cross, which was not in "Son of God."  In the movie,  Pilate's wife called Jesus king of the Gods.  There is only one God. If you believe something different that's fine, but keep in mind we're talking about a movie about Jesus.   Other incorrect scenes:  Instead of Jesus saying, "Lazarus come out!"  Jesus went into the tomb and whispered in Lazarus' ear, "Whoever believes in me shall not die."  The scripture is true about not dying, but it was not what He said to raise Lazarus.  If I were someone who wanted to learn about Jesus, it sends the message when I die, will rise from the dead.  The placing of this scripture is inaccurate and misleading (John 11:43).  I can go on and on about this movie, but I wont.  I am glad there is a recent movie about the life of Christ and not just surrounding the beating.  Don't get me wrong,  The Passion was an excellent movie.  They really did their homework.  If that same crew worked on Son of God, it would have been an excellent film.

Final point:
Remember when I said everything in a film should have a purpose?  When the woman was caught in the act of adultery, the Pharisees were about to stone her.  They tried to trap Jesus with a rhetorical question, "Teacher, this woman was caught in the act of adultery. In the Law, Moses commanded us to stone such women.Now what do you say?"  Jesus replied, "Let any one of you who is without sin be the first to throw a stone at her.”  After hearing this, them men left her alone.  In "Son of God", Jesus picks up a stone as well and tells the men, "I will give my stone to the man who is without sin."  The Pharisees walked away followed by Jesus dropping his stone in slow motion.  Slow motion has a tendency of framing a shot. Purpose:  by Jesus picking up a stone and then dropping it sends a message (visually) that Jesus has also sinned.  Jesus was without sin. I don't know who wrote this film or who directed it, at this point I have no interest in who did.  Whoever made this movie, couldn't have done all of their homework.  After 2hours and 18 minutes I had no real understanding of who Jesus was or what he stood for.  Jesus, in this film, at times, seemed to be uncertain of the words he used.  He wasn't portrayed as all knowing.  Whatever god you serve, the truth is Jesus existed.  This is a movie based on Biblical history.  As a filmmaker, when doing a historical film it is your duty to stay true to just that, the history.  As someone who believes in God, you must do God like work.  When it comes to using our talents for God far too many people have a half assed attitude.  I have often heard people say, "All God cares about is your heart and that you tried."  That's true.  However, let me ask, If the President asked you to come to the White House and cook a dinner would you make him a bologna sandwich?!  I think not.  You will do your absolute best to knock him out of his seat with a wonderful 5 course meal.  That is what we should do for God, try to knock his socks off.  Give Him our best, because He gives us His best.  Unfortunately, I feel this movie was a bologna sandwich.

Posted by Cornelious Jordan at 1:50 PM