My Conversation with Bill Maher

What's up everyone. I wanted to share this story with my readers:

I was talking my friend Adrien two weeks before the date above, she is an atheist. We were talking about Bill Maher. Although we have different beliefs about religion, we have mutual respect for his political views and his overall intelligence.  I told her, "You know, I would love to sit and have a conversation with Bill Maher.  It would be cool to tell him my views about being a Christian.  Hmph, I wonder what he would say?"  So imagine my amazement when I am at a popular restaurant in Los Angeles and in comes Bill Maher.  I see this guy and I think, "This ain't nothin' but God."  Of course Bill Maher would beg to differ.  If you are a Los Angeles local everyone knows you don't do the autograph and picture thing.  It's just not cool.  I'm super nervous and excited all at the same time because I'm wondering how am I going to approach this dude.  He is having dinner with a friend and I'm going to get up and talk to this HUUGE atheist about Jesus?!  I shake my head and laugh to myself.  Finally, I say, "Forget this.  I'm not going to let this opportunity pass me by.  God put this opportunity in my lap and I'm going to take it."  I time it just right.  Bill Maher gets his check, his friend pays and goes to the bathroom or as the Britts say "the loo."  Here we go...its all or nothin'.

Me:  Please pardon me, but I never do this.
his friend returns from the loo

Me(cont.):  I have a blog.  At the time it was called, "What Do You Think About Jesus?"
Bill and his friend give each other a stare

Their faces:  Aww Sh**!
I laugh to myself a little

Me:  I already know what you're thinking. I know you're an atheist, however, I wanted to tell you that I really respect your opinion.  I am a Christian, so obviously we are on opposite ends of the spectrum as far as religion goes, but you are one of my favorite speakers.  I was wondering, if and only if it's okay, could I take a picture with you for my blog?
I'm thinking I sound like a freakin' crazy fan or something, this is so lame.

Bill pauses and thinks for a second. He has a look like, "What just happened here."

Me: Whew!
At this point I am still standing and I tell Bill Maher and his friend a little about the site.

Me:  ...the main purpose is to eradicate the uneasiness of religious conversations. You know how sometimes people get weird when you talk about religion?  That's what I want to get rid of.  The title of my last blogpost was called "Where was God at Penn State?" (I think to myself, "Most people think that's a really deep question, what's he gonna say")

Bill Maher:  ...where was God when those kids got the cleft lip?  What's up with that? It's like waay up there man.

At first I'm confused, "Is he serious or is he screwing with me?"  I have no clue what to say, because I'm totally caught off guard.  I'm also fighting the urge to laugh.  I think to myself, "I know, I'll try to say something clever."  I shrug my shoulders and say...

Bill Maher:  I mean its Waay up there, man!
He takes his finger and starts cramming it up his lip

I'm still trying hard not to laugh, but I break

Me: (laughing at his gestures) You know you're not supposed to laugh at that kinda stuff, man.  (continuing) It was a really good blog topic, you know...(continuing to chuckle a bit)

Bill Maher:  (being serious) You should check out this article.  It's really interesting.  It's about how difficult it is being black and atheist.

Me:   I could imagine because of the history of our culture.  I'll check it out.
I shake his hand and sit down at the table

Me(cont):  You know I wasn't always like this, a full believer, because of the type of "christians" I encountered. I like to call myself a "Follower of Christ" now.

Bill Maher:  You know what man, I've got no respect for you...

His friend stands up to take the picture 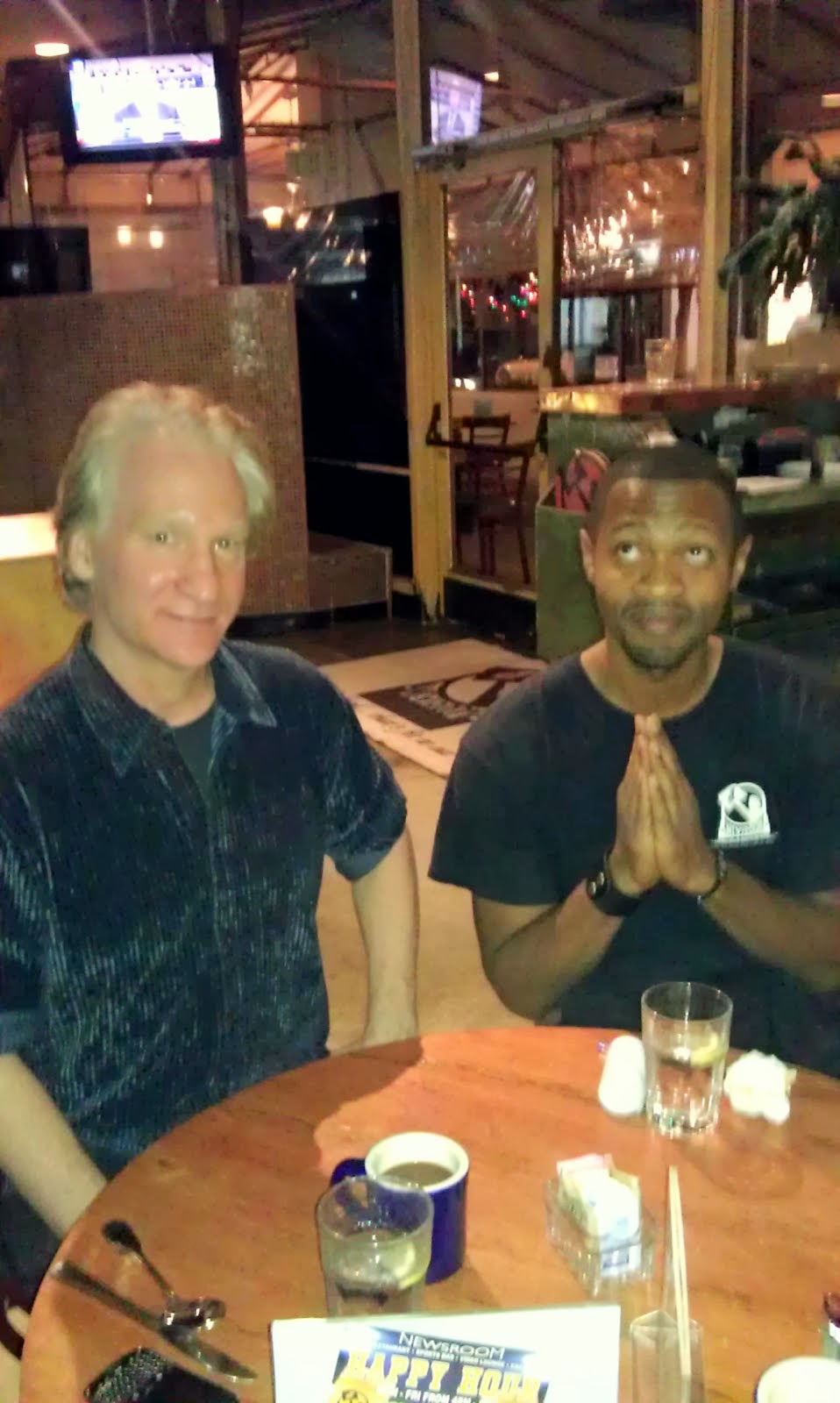 Lol. That's how the picture turned out. Now that I think about it, I don't think I said thank you.  I shake Bill and his friend's hand and right before they leave, his friend turns around and says, "See you in heaven!"
Lol. I hope so guys...I hope so.

It has been a year and about 2 months since that day.  If I saw Bill Maher now, I'd probably say what's up and buy him a shot. lol  The thing I would like my readers to know is, it's ok to have differences, but do not let those differences divide you.  Now don't get me wrong I would love it if Bill Maher accepted Jesus as his savior, however it is not my job to judge him.  My job is to live by example.  My challenge to you, my beautiful audience, is to find someone you appear to have nothing in common with.  Whether they have a different political belief, sexual orientation, or religious belief sit with them and talk.  You may discover you have more in common than you think.  THE, I say, THE most important thing is to respect one another's opinion.  You never know what a person has gone through or what has caused them to think the way they think.

Have a great day, and Voice Your Belief.

p.s. The restaurant was called the Newsroom Cafe' in West Hollywood.  It is now closed for business as of Sept. 15, 2014
Posted by Cornelious Jordan at 2:05 PM

Email ThisBlogThis!Share to TwitterShare to FacebookShare to Pinterest
Labels: throwback thursday, what do you think about jesus